In this project, we have been researching and developing distributed real-time systems for spacecraft control. The technical term 'real-time' means that processing and communication have time constraints including deadlines, cycles, etc. A distributed real-time system works only if its processing and communication meet the time constraints. For example, if the motor control process in a system does not meet the time constraint, the system cannot operate normally and may cause an accident. Furthermore, a spacecraft system operating in outer space environment is required to continue operating even under the influence of cosmic radiation, vibration, heat, etc. In order to achieve distributed control for spacecraft, we have researched and developed an SoC (System-on-Chip) that integrates a real-time processing CPU, real-time communication, memory, control I/O, etc. in a single-chip LSI. We are also conducting research and development on SiP (System-in-Package), which is an ultra-small board that integrates the SoC, DRAM, Flash, connectors, etc., and a real-time OS (favor). Specifically, sRMTP (Space Responsive Multithreaded Processor) for highly functional distributed real-time control integrates RMT PU (Responsive Multithreaded Processing Unit), real-time communication Responsive Link (ISO/IEC 24740), embedded SRAM and DRAM controller with error correction function, and various I/O peripherals (UART, PWM, GPIO, etc.) in a single-chip SoC. The RMT PU can achieve fine-grained real-time processing by the unique special functions including simultaneous multithreaded execution with priority, IPC control mechanism to control the speed of each program, context cache to reduce the overhead of context switch, thread wakeup mechanism by the corresponding interrupt, etc. Responsive Link can communicate among multiple nodes in any topology, and each node can transmit packets according to the priority given to the packet, so preemptive real-time communication can be performed. In addition, sIO core is an SoC that integrates a simple CPU, Responsive Link, and various control I/O peripherals on a single chip, making it possible to easily build a relatively simple distributed control node. These sRMTP and sIO core are designed to have system level, architecture level, and process level dependability, and achieve multi-level dependability. Our technologies are applicable not only to spacecraft but also to any distributed real-time system. 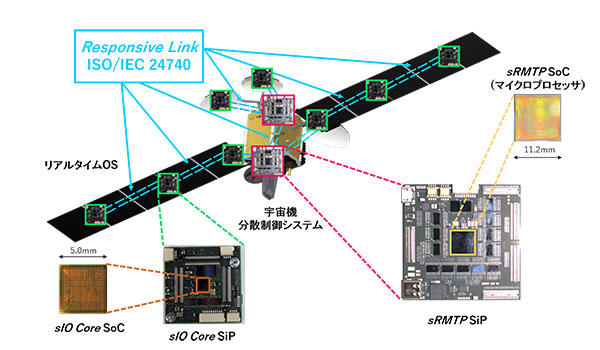